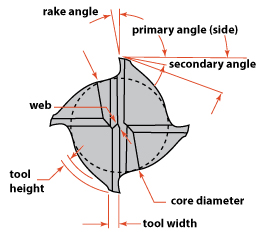 Angular Edge – The cutting edge that is a straight line and forms an angle with the cutter axis. The cut that an Angular edge tool produces will not be as flat as a helical cutting edge.

Axial Runout – The difference between the highest and lowest indicator reading that is taken at the face of a cutter near the outer diameter.

Back taper – A slight taper resulting in the shank end of the cutting diameter being smaller than the cutting end. This condition aids not only the plunging or drilling condition but also tends to compensate for deflection.

Chamfer – A short relieved flat installed where the periphery and face of a cutter meet. It is used to strengthen the otherwise weak corner.

Chip Breakers – Special geometry of the rake face that causes the chip to curl tightly and break.

Chip Splitters – Notches in the circumference of a corn-cob style Endmill cutter resulting in narrow chips. Suitable for rough machining.

Clearance – Space created by the removal of additional tool material from behind the relief angle.

Clearance Angle – The angle formed by the cleared surface and line tangent to the cutting edge.

Concave – Small hollow required on the end face of an Endmill. This feature is produced by a dish angle produced on the cutter.

Convex – An outward projection radius feature on the end face of a ball mill.

Core Diameter – The diameter of a cylinder (or cone shape with tapered Endmills) tangent to the flutes at the deepest point.

Counterbore – A recess in a non-end cutting tool to facilitate grinding.

Cutter Sweep (Runout) – Tool material removed by the fluting cutter (or grinding wheel) at the end of the flute.

Cutting Edge – The leading edge of the cutter tooth.  The intersection of two finely finished surfaces, generally of an included angle of less than 90 degrees.

Cutting Edge Angle – The angle formed by the cutting edge and the tool axis.

Differential pitch cutters – A specifically designed variation in the radial spacing of the cutter teeth. This provides a variation in tooth spacing and can be beneficial in reducing chatter. This concept is based on reducing the harmonic effect of the tool contacting the part in an exact moment of vibration.

Dish Angle – The angle formed by the end cutting edge and a plane perpendicular to the cutter axis. Dish ensures that a flat surface is produced by the cutter.

Entrance Angle – The angle formed by a line through the center of the cutter at 90 to the direction of feed and a radial line through the initial point of contact. As this angle approaches 90 degrees the shock loading is increased.

Entrance Angle: Ramp in – The angle or radius value to enter the cutter into the part surface.

Fillet – The radius at the bottom of the flute, from which core diameter is found.

Flute – Space between cutting teeth providing chip space and regrinding capabilities.  The number of cutting edges.  Sometimes referred to as “teeth” or “gullet”.  The number on an end mill will determine the feed rate.

Gash (Notch) – The secondary cuts on a tool to provide chip space at corners and ends. The space forming the end cutting edge, which is used when feeding axially.

Gash angle – The relief angle of the gash feature.

Gash width – The width of the gash feature. The space between cutting edges, which provides chip space and resharpening capabilities. Sometimes called the flute.

Heel – The back edge of the relieved land. It is the surface of the tooth trailing the cutting edge.

Helical – A cutting edge or flute which progresses uniformly around a cylindrical surface in an axial direction. The normal helical direction is a right direction spiral.

Helix Angle – The angle formed by a line tangent to the helix and a plane through the axis of the cutter or the cutting edge angle which a helical cutting edge makes with a plane containing the axis of a cylindrical cutter.

Hook – A term used to refer to a concave condition of a tooth face. This term implies a curved surface rather than a straight surface.  Hook must be measured at the cutting edge, making measurement difficult.

Land – The narrow surface of a profile sharpened cutter tooth immediately behind the cutting edge,

(A) Cylindrical – a narrow portion of the peripheral land, adjacent to the cutting edge, having no radial relief.

(B) Relieved – A portion of the land adjacent to the cutting edge, which provides relief.

Lead – The axial advance of a helical cutting edge in one revolution.

Length of Cut (Flute Length) – The effective axial length of the peripheral cutting edge which has been relieved to cut.

Radial Rake angle – The angle made by the rake face and a radius measured in a plane normal to the axis.

Rake – The angular relationship between the tooth face or a tangent to the tooth face at a given point and a reference plane or line.  An angular feature ground onto the surface of an end mill.

Relief-Space – Provided by removing material immediately behind the cutting edge. Done to eliminate the possibility of heeling or rubbing.

Tangential rake angle – The angle made by a line tangent to a hooked tooth at the cutting edge & a radius passing through the same point in a plane normal to the axis.

Tooth – The cutting edge of the Endmill.

Tooth Face – Also known as the Rake Face. The portion of the tooth upon which the tooth meets the part.

Shank – The projecting portion of a cutter which locates and drives the cutter from the machine spindle or adapter.